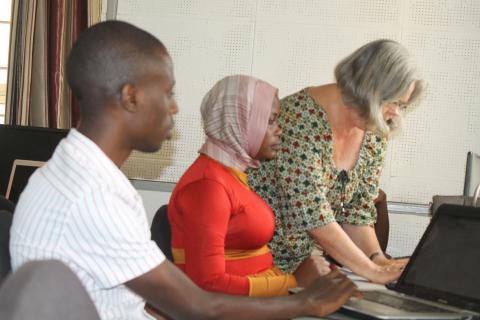 The Department of Journalism and Communication, Makerere University has hosted a one week session of the Rig Press Freedom project.

Thirty five final year journalism students participated in the project. They were divided into five groups, with each group focusing on one country. The main task of the participating students was to write news stories on the media environment and conditions for press freedom.

According to the participants, the project has been very beneficial and full of experiences, making it a better orientation into the journalism practice.

"I have made connections with journalists from Rwanda which has been my group’s country of focus but also learnt tactics of getting sources since it hasn't been easy at all," Ashraf Ntale, one of the participants said.

While issuing out certificates, Prof. Aaron Mushengyezi, Dean, School of Languages, Literature and Communication, urged participants to use the acquired skills and shine a light into the journalism practice.

"Go and be champions of press freedom especially in this era filled with lot of fake news. Working on a foreign country gives you a comparative outlook on press freedom to know where you are doing better and where you need improvement," said Prof. Mushengyezi.

Dr. William Tayeebwa, the Head of Department of Journalism and Communication, extended his appreciation to Oslo Metropolitan University for choosing Makerere University as hosts for the 2018 Rig project.

"It is like a reporting clinic; you sit down one week and get information from other countries. We are working with Norway in many areas and I pray that this partnership keeps on growing to bear more fruits," Dr. Tayeebwa said.

What is the “Rig” project all about?

The Rig project was developed by Ms. Elsebeth Frey and Mr. Asdgun Olteldal of Oslo Metropolitan University. It aims at educating and informing journalism students on the concept and meaning of press freedom. The purpose of the project is to help students grasp the meaning of press freedom and its significance for journalism, which is often taken for granted in some countries. It involves researching, developing and publishing stories about the conditions for press freedom in different countries around the world.

Although it started 10years ago, it was just a small project at the department of Journalism and Media Studies at Oslo Metropolitan University until 2016 when an initiative was made to make the Rig global by taking it to other countries, starting with Cannes in France and Nablus in Palestine and now Makerere University in Uganda.

Check our website to view the stories written in this year’s Rig project at Makerere University on http://journalism.mak.ac.ug/?q=press-freedom